As a result we need to be revived and restored to the early devotion we had for becoming loyal disciples of Jesus Christ.

Acts 3:19 is a good definition: “…Repent ye therefore, and be converted, that your sins may be blotted out, when the times of refreshing shall come from the presence of the Lord;

And as modern evangelism looks more and more like emotionalism we are in more need today than ever for an authentic revival effort.

There have been examples of extraordinary movements of the Spirit of God throughout history.

One example is the tremendous movement of the Spirit of God in Korea (1906-1910) with 80,000 added to the churches. Since the Korean War, 15 million have come to Christ in a nation of just over 40 million.

Another example is China. There were less than one million Christians in China prior to 1950. Primarily in the last 25 years

In our nation’s history we have experienced three major revivals:

FIRST: The Great Awakening about 1740 in the time of George Whitfield and Jonathan Edwards. All of society was dramatically affected. Thousands came to Christ. The Great Awakening became probably the major unifying factor among the American colonies at that time. Laid the spiritual foundation for the beginning of our nation.

SECOND: The Second Great Awakening at the beginning of the 19th century. 1785-1820. Taverns were closed, families were reconciled, young people became serious in their pursuit of God. Thousands came to Christ.

THIRD: The third great period of revival in America took place at the beginning of the 20th century. Immigrants were coming to America from all over the world.

As these immigrants were arriving, God chose to raise up a number of great evangelists like Dwight L. Moody and others to preach the gospel to them. Tens of thousands came to Christ. Beginning of Sunday Schools. Beginning of the American Bible Society. Missionary societies were formed.

But the Church in America in spite of its many activities and apparent successes has no measurable affect in reversing this downward spiral.

Religion is up and morality is down.

Revival is possible as long as God is God. Jonathan Edwards argued that God grants light when the darkness is the greatest.

It was at just such times that revival occurred in America’s history.

When there was disinterest in religion, gross immorality, rampant unbelief, God poured out his undeserved, gracious blessing.

CONDITIONS FOR REVIVAL ON GOD’S TERMS
2 Chronicles 7:13-14
Notice in verse 13 that God says that there may very well be times that He must use trials and uncomfortable situations to get the attention of His people...

1. IF MY PEOPLE WILL HUMBLE THEMSELVES

God said... My people... not the government, not the world... but His people!

God has said, "If my people will humble themselves." God will visit us when we reach a point of desperation. When we surrender that pride, when we give up the idea that we can do pretty good on our own, and we get down on our knees and admit things are not as they should be, then God will come to His people. God says that the first thing I am looking for in my people is a spirit of humility.

David said in Psalm 51:16-17,  For thou desirest not sacrifice; else would I give it: thou delightest not in burnt offering. 17  The sacrifices of God are a broken spirit: a broken and a contrite heart, O God, thou wilt not despise.

Q: When I was at my lowest, confounded by obstacles, bewildered by the darkness that surrounded us … I discovered an astonishing truth: God is attracted to weakness. He can’t resist those who humbly and honestly admit how desperately they need him. Our weakness, in fact, makes room for his power.” -Unknown

2. IF MY PEOPLE WILL PRAY AND SEEK MY FACE

Are you pretty satisfied with the state of the church today – with the devotion to God in your own heart? Revival will not come that way. God never sends revival to those who don’t want it enough to even bother asking for it in prayer.

Jonah 3:4-10... Tells of a nation that has a genuine desire to repent of their sins.

Jeremiah 29:11-13 For I know the thoughts that I think toward you, saith the Lord, thoughts of peace, and not of evil, to give you an expected end. 12  Then shall ye call upon me, and ye shall go and pray unto me, and I will hearken unto you. 13  And ye shall seek me, and find me, when ye shall search for me with all your heart.

Dwight L. Moody, that famous evangelist from Chicago went on vacation to England. He wasn’t planning to do any preaching; he was on a sabbatical. But he met a pastor there who said, "Mr. Moody you’re so well known, would you come and speak at our church?" So he went to preach the next Sunday morning.That afternoon Moody wrote in his journal that they were the deadest crowd he had ever seen and that the only thing worse than preaching to those people was that he had promised to go back that night and preach again. But as he preached he noticed that the atmosphere had changed, he did not know just why. At the close of the meeting, he was led to give an invitation for those who wanted to be saved to stand. Something amazing happened. A great crowd of people stood. He didn’t know what to do. So he said, "Maybe you don’t understand what I am asking. So when we are dismissed if you believe you are unsaved and you need to be saved come over to this little room and meet with me." When the service was over, he went to the room it was packed! He left the next day for Dublin Ireland. Shortly after arriving there, he received a telegram from the church to return, “Come back. Revival has broken out." So Moody got back on the train, went back to that church and preached 10 straight nights. And hundreds of people came to Christ. Not long afterwards, he learned the secret. An invalid lady, who could not attend the church, was praying for a mighty outpouring of the Spirit upon the church. She prayed for months. Once she saw in the papers accounts of some of the Moody meetings in America, and although she had never heard of Mr. Moody before, she began to pray that God would send him to her church in London for a revival. One Sunday morning, her sister returned from the service and informed her of Moody’s presence and his preaching. She spent the whole afternoon in prayer that God would make that night a night of power. And God did!

Charles Spurgeon said – “Whenever God determines to do a great work, he first sets his people to pray.”

3. IF MY PEOPLE WILL TURN FROM THEIR WICKED WAYS

Repentance is not only for the hardened sinner. Repentance is often required of those of us who have accepted Christ and are inside the church. Our Lord said to the church at Ephesus, Remember therefore from whence thou art fallen, and repent, and do the first works; or else I will come unto thee quickly, and will remove thy candlestick out of his place, except thou repent. Revelation 2:5

Real repentance involves confession of sin and turning away from it.

When Paul preached at Ephesus, the Bible says that "many came, and confessed, and showed their deeds" -and not only that, they turned from their sins, and made a bonfire of those things which should not have been in their homes.

Our sins need to be confessed, and if we have wronged another person, we need to confess and make restitution.

If we are to be clean we have to renounce all bitterness, wrath, malice, harshness, unforgiving spirits, filthiness, and immorality; in short, anything that would “give the devil a foothold”
Eph. 4:27 Neither give place to the devil.

Dear friend if you find yourself desiring a fresh touch from God then count yourselves blessed... So many are wandering around cold and complaisant not caring to ever really be on fire for God. Run to Him hungry and thirsty and allow Him to fill you once again.

Posted by threeandtwentychurch at 12:03 PM 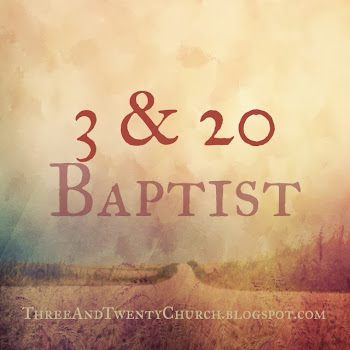 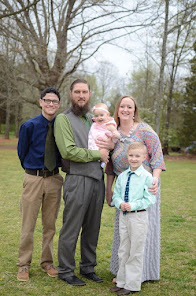 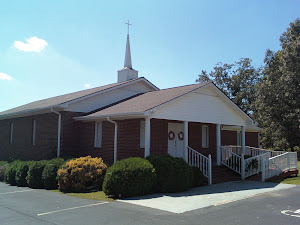 "For scarcely for a righteous man will one die: yet peradventure for a good man some would even dare to die. But God commendeth his love toward us, in that, while we were yet sinners, Christ died for us. Much more then, being now justified by his blood, we shall be saved from wrath through him."
~Romans 5:7-9 (KJV)

A word from our Pastor

threeandtwentychurch
Greetings, I am Pastor Chad Bates and I am blessed to oversee Three & Twenty. We desire to share the Gospel of Christ to all who live around us by following Christ daily. Our fellowship is blessed with many young families who have a heart to raise their children to love and follow Christ. We believe that none of us can live a fruitful life in Christ without His precious Word and Spirit guiding our lives. We also believe our men understanding their God-given responsibility to be the spiritual leader of the home... As well as the wife understanding her place as a valuable help-meet and keeper at home will create a biblical sense of worth. If we are to see our churches revived in these last days then our homes must first be revived and biblical order and holiness must fill our homes once again. It will never be enough to just "go to church", we must be the church... We must pray, worship and read God's word at home together as a family if our churches are to have any strength in these dark days. If you're looking for a church or are in the area visiting then please stop by and say hello... You would be most welcomed!